A new report from the UN's World Meteorological Organization (WMO) cautioned that the interaction between pollution and climate change would impact hundreds of millions of people over the coming century, and urged action to rein in the harm.

The WMO's annual Air Quality and Climate Bulletin examined the impacts of large wildfires across Siberia and western North America in 2021, finding that they produced widespread increases in health hazards, with concentrations in eastern Siberia reaching "levels not observed before."

"As the globe warms, wildfires and associated air pollution are expected to increase, even under a low emissions scenario," WMO chief Petteri Taalas said in a statement.

"In addition to human health impacts, this will also affect ecosystems as air pollutants settle from the atmosphere to Earth's surface." 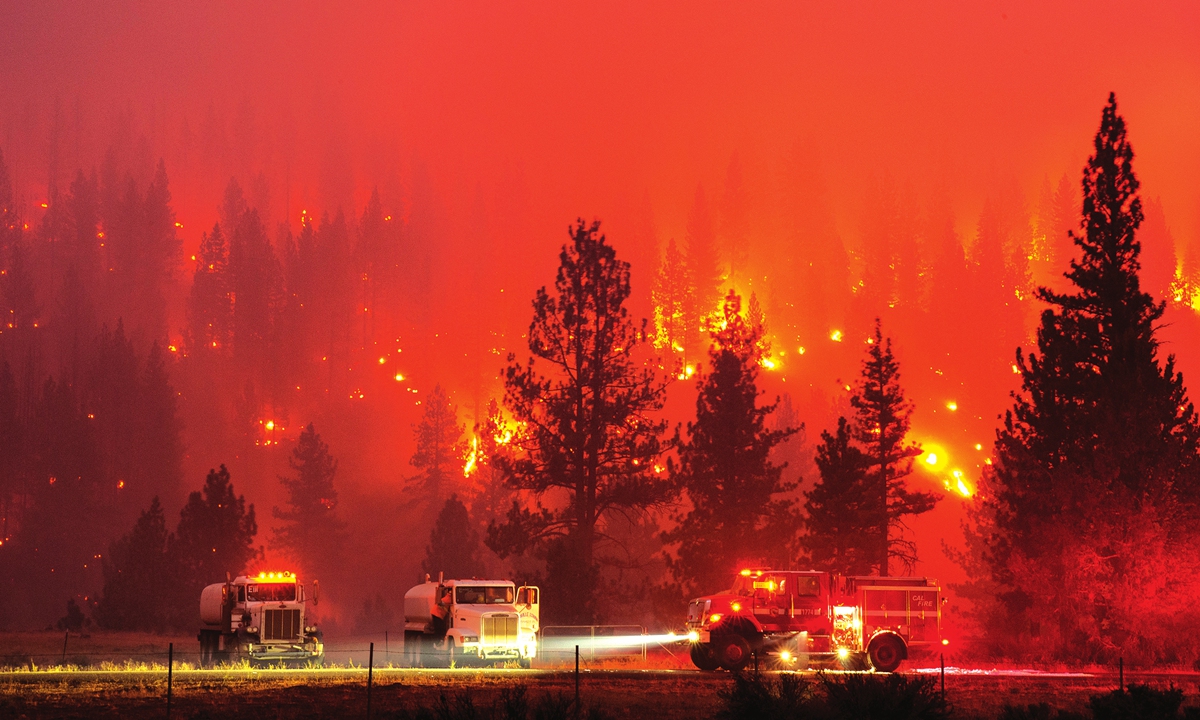 In this long exposure photograph, firefighters mop up hot spots from the wild fire along highway 36, near Susanville, California on Monday. The fire spread to more than 6,000 acres and created its own weather, generating lightning, thunder, rain and fire whirls out of a huge pyrocumulonimbus ash plume. Photo: AFP

At the global scale, there has been a reduction over the past two decades in the total burned area, as a result of decreasing numbers of fires in savannas and grasslands.

But WMO said that some regions like western North America, the Amazon and Australia were seeing far more wild fires.

Even beyond wildfires, a hotter climate can drive up pollution and worsen air quality.

Taalas pointed out that severe heat waves coupled with stable high atmospheric conditions, sunlight and low wind speeds had been "conducive to high pollution levels," warning that "this is a foretaste of the future."

"We expect a further increase in the frequency, intensity and duration of heat waves, which could lead to even worse air quality," he said.

This phenomenon is known as the "climate penalty," which refers to how climate change amplifies ground-level ozone production, which negatively impacts air quality.

In the stratosphere, ozone provides important protection from cancer-causing ultraviolet rays, but closer to the ground it is very hazardous for human health.

The report points out that air quality and climate are interconnected, since chemicals that worsen air quality are normally co-emitted with greenhouse gases.

"Changes in one inevitably cause changes in the other," it said.