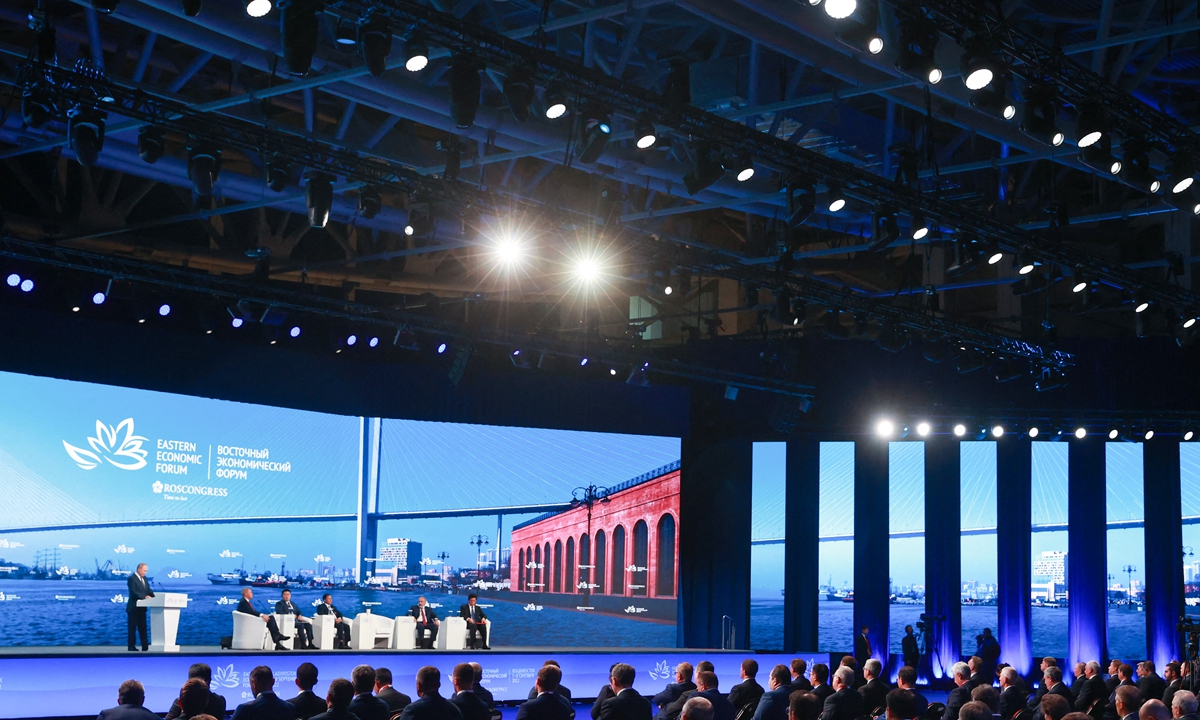 The 7th Eastern Economic Forum (EEF) hosted by Russia kicked off in Vladivostok on Monday and will run through Thursday. The forum has attracted more than 5,000 visitors from 67 countries and regions. During the forum, Russia announced or discussed a number of bilateral and multilateral cooperation including energy and food with China, Vietnam, Myanmar and other countries. For such a normal occasion for discussing economic and trade cooperation, the US and Western public opinion has been using almost "blanket search" attempts to check whether there was any "criminal evidence" that "China secretly helped Russia," and even blaming that China "has not restrained from deepening economic ties with Russia." This is rude, domineering and ridiculous.

Against the backdrop of the Russia-Ukraine conflict, Russia's "turning eastward" is certainly a result of the fact that the US has implemented severe sanctions, but it is more a result of a general trend. Since the first EEF in 2015, it has been defined as a window for Russia to integrate into the Asia-Pacific development. In recent years, the Russia-US ties had ups and downs from time to time, but Russia's general direction of further strengthening economic ties with the Asia-Pacific has not changed. The root is precisely that the Asia-Pacific is a high ground for peace and stability, and it is also a hot spot for cooperation and development. No major powers can go around the Asia-Pacific when it comes to development, nor can they avoid China. The trade volume including the one between the US and China has continued to hit new highs. As friendly neighbors, it is natural for China and Russia to ramp up their economic and trade exchanges.

Today, some US and Western public opinions wear tainted glasses. Once they see cooperation between China and Russia, they reflexively and immediately become anxious about the "failure of sanctions," and then accuse China of sabotaging "Washington's global efforts." This is a kind of guilt that is hard to hide. It is necessary to underline that the US and the West have no qualifications, nor the right, to prevent or interfere with other countries' normal cooperation with Russia. As power politics is still a reality of international politics, the US and the West have indeed created a certain "chilling effect," but this does not work for countries that insist on independent diplomacy.

As a matter of fact, the majority of Asia-Pacific countries have not interrupted their economic exchanges with Russia. The same is true around the world. Some US public opinions pick on the issue of China and Russia settling gas deals in their own currencies. They play up the old tune of their "concern" about the "China-Russia alliance." Meanwhile, they have to admit that an "unexpected impact" of the US sanctions policy is that it "weakened the non-Western countries' confidence in the US dollar." For example, India in July unveiled a rupee settlement system for international trade. This is not surprising at all. It just demonstrates that the means of severe sanctions cannot "expel" a major country from the global market, but will only make the US more "asocial." It should be pointed out that China and Russia have been pushing forward the use of local currencies for settlement for many years, which is not at all a "retaliation against the US" as Washington assumes. China doesn't have the leisurely mind of circling the US.

The development cooperation between Asia-Pacific countries and Russia is endogenous and continuous, and is not subject to the anti-Russia will of some countries. China purchases energy and food from Russia in a bid to make domestic ordinary people's lives better. The same logic applies to other developing countries, including Thailand, India and Vietnam, that are boosting cooperation with Russia. Such mutually beneficial cooperation is a legitimate right of sovereign countries that do not require "restraint." It also conforms to the principle of inclusiveness in global politics. It should be promoted and strengthened without fear of any country's threat. What should really be "restrained" is not the legitimate cooperation between China and Russia, but the geopolitical fanaticism that the US and the West have been unable to extricate themselves from.

The US is paying closest attention to China-Russia cooperation, promoting the creation of the international public opinion that "binds" China and Russia. It wants to achieve the goal of simultaneously suppressing China and Russia at a lower cost. To put it bluntly, it wants to "kill two birds with one stone." However, China-Russia relations are not an alliance in the Western context, and China-Russia cooperation has never excluded or targeted a third party, but has always been open. The two independent powers seek harmony not uniformity and their relations are partnership rather than alliance. They can neither be forcibly "bound" nor is there any "struggle between two tigers." This is probably puzzling to the US and Western elites. We should be grateful that the world does not run on their will.